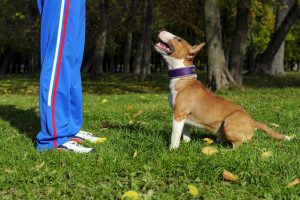 We will be highlighting different training tips.

A viewer of this video recently commented to me, “This dog’s not aggressive because the definition of aggression is that he has an intention to hurt. The dog is just poor and misunderstood.”

While it’s clear that, yes, this little Jack Russell Terrier was probably misunderstood by his previous owners who returned him to the animal shelter, the full definition of aggression, as described in “Nelson’s Biology of Aggression” textbook includes the fact that threats intended to make you go away are also considered aggression. Even setting the definition aside, while most people look at the first few snarls or snaps as a fluke because they are so infrequent, doing so is similar to responding to reports that your child has gotten into a fight at school while using a bat or knife as a weapon, by saying, “Well it doesn’t happen very often.”

With dogs, all snaps and snarls or signs of fear need to be taken seriously because with practice they can turn to overt aggression leading to a bite. That is, unless you take steps to understand and remedy the situation, the dog is not likely to get better, rather these dogs tend to get worse.

For instance take this common scenario, Mr. Blue states, “A friend came to the house and went to pet Fifi. Usually Fifi avoids people or barks but then warms up to them. She would never hurt a fly. But yesterday when my friend reached for her this time she lunged and bit. I don’t know why.”

Or the scenario may sound more like this, “We were walking down the street and we saw a cute Shih Tzu. I asked the owner if my daughter could pet the little dog and if the dog was friendly. The owner said, ‘yes’. But when my daughter reached out, the dog backed up for an instant and then leapt forward and bit her. The owner was shocked and said to me, ‘She’s never done that before.'”

In both of these cases the owners failed to read their dog’s signs of fear or to take in consideration that their past fearful or reactive response might progress. Instead of thinking or saying, “She’s never done that before,” a more appropriate thought would have been, ” I guess in the past I’ve just been lucky that she had never bitten YET!”

Dogs can respond to fear by fleeing, freezing or fighting. For many dogs, the only question is at what point will they decide that fighting works best. With this in mind, it’s important that when you see signs of fear or even if your dog already barks and lunges and nips, you should address the issue immediately instead of relying on luck. And hopefully address it successfully before it turns into a bite.

How to Fix Aggression

Ideas of how to address aggression vary among dog trainers with some saying you should have the dogs face their fears, the way you would deal with a fear of speaking in public or making friends in a room full of strangers. For dogs it would involve something like placing them a room of people they prefer to avoid and hold them down to show them you’re in charge. This type of technique, where you introduce the dog to the situation or stimulus full force, is called flooding. The idea is that the dog should calm down instead of becoming hysterical.

This approach can definitely work in a small subset of dogs, just like giving you a speech and throwing you in front of an auditorium may cure some people of their speech fears. This method can especially work in those cases of dog aggression or fear that really are not that difficult—ones that even though they may bark ballistically or even bite, would do well if you just got them out in public a lot with really very little training other than making sure that they are somewhat controlled instead of pacing and lunging and barking.

While some dog trainers would go with the method described above, veterinary behaviorist, Ph.D. behaviorists, and those who base their methods on the science of animal behavior favor a graded approach that relies on changing the pet’s perception of the event and training more appropriate responses. To really understand this approach, you first have to understand the nuances of treating fear. You must first put yourself in the place of a fearful pet. For instance, imagine you are afraid of spiders. Then, imagine how you would feel if spiders were allowed to walk right up to you. Even if the spider is harmless or a baby, you’d want to get away. Now imagine someone held you so that you couldn’t escape and even held your mouth so you couldn’t scream when the spider was so close you feel it’s course hairs. Undoubtedly, this treatment would help some people to improve.

Photo from Low Stress Handling, Restraint and Behavior Modification of Dogs & Cats (book & DVD). If you’re afraid of spiders you don’t want a spider in your face, even if it’s a friendly baby spider. Similarly, if dogs are fearful or uncomfortable with some unfamiliar people, approaching the dog can cause him to defend himself.

But it’s likely to cause others to get much worse. They may stop struggling, not because they’re no longer fearful, but more likely because they are catatonic; they have given up. Their internal emotional state of fear has not changed but they are now expressing it in a different way, more like a possum playing dead. When you look at it from a more empathetic perspective, it’s pretty clear. Animals, including humans, respond to fear by fleeing, fighting or freezing and remaining very still. When fleeing and fighting don’t work, freezing is the only remaining choice.

As a result, the arachnophobe who’s held while spiders dangle in her face may finally freeze, but she will most likely still fear spiders even if she’s not allowed to show her fear when you’re around. You might think, “Well, no harm done,” but the repercussions down the road are that she becomes more fearful of spiders and that her fear may generalize to anything that reminds her of spiders—locations where she’s seen spiders, objects that she can’t immediately identify. Basically she may develop a post traumatic stress of sorts.

Low Stress Handling, Restraint and Behavior Modification of Dogs & Cats (book & DVD). Holding an arachnophobic person down so she can face her fears and a spider approaches generally does not make the person feel better. They may eventually top struggling even though internally they feel scared. The traumatic event may even make them more fearful of spider.

Similarly with dogs, putting them into the scary or reactive situation and just holding them down may cause them to look better on the outside but feel more conflicted on the inside. They may learn to hide their signs of fear because acting out their fear gets bad results. Then down the road, when they are in a scary situation, they may no longer give a warning growl. Instead, when they can no longer handle the fear, they break it in a bite out of the blue. So the outward warning signs of their inward emotional state have been extinguished leading to a more dangerous dog.

What are Your Other Options?

What do those fancy scientific words mean? They’re actually pretty simple. Classical counterconditoning basically means you’re going to change the pet’s underlying emotional state, in this case from fearful to happy. Operant counterconditioning means you’re going to train more appropriate behaviors such as focusing and engaging in behaviors with you rather than barking, lunging, or being reactive around the scary people. Desensitization in essence means you’re going to start with the scary person far away or less threatening somehow and when the dog can deal with that level of scariness, the person moves closer or acts scarier.