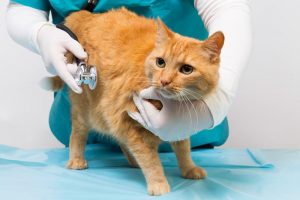 Cats visit the veterinarian less than half as often as dogs. Assumptions that cats don’t require the same care as dogs or don’t get sick as often just aren’t true. While indoor cats are healthier overall, it’s a mistake to believe that indoor cats don’t get sick. The health status of cats, particularly older cats, can change very quickly compared to humans. Cats are skilled at masking illness. Often, even the most keenly observant family members are challenged to identify the subtle signs of illness in cats. Sometimes they can only be discovered during a veterinary exam: listening to the heart, checking the weight, and routine laboratory tests. Diagnosing a disease early on usually improves the prognosis, lessens the cat’s suffering, and on average, costs the owners less money.

The most common excuse for not visiting the veterinarian involves getting your cat there. The process of “stuffing” your cat into a carrier can be very stressful for both the cat and the owner, not to mention exhausting. Here are some tips; while best started as a kitten, carrier training truly is possible at any age.

Begin by choosing a hard carrier with a top that easily opens or lifts off, or a soft carrier with sides that don’t sag inward on the cat.

Keep the carrier out all the time in a safe place (you may want to start in “convertible mode” with the top off) and randomly toss treats inside so it becomes an automatic treat dispenser for your cat.

Feed your cat in the carrier. Start by feeding right at the carrier door and gradually move the food dish farther inside.

Periodically use an interactive toy to direct play to the carrier, encouraging the cat to jump in and out.

Close the carrier and calmly pick it up and take it a couple of steps then open it. Gradually work up to a longer time.

Take the carrier to the car. Sit there a few minutes before starting the engine and pop treats inside. Then take her back inside the house and give her a meal. Next time take her for a ride, popping treats in.

Seventy percent of cats show some oral disease by age 3. Bacteria that cause plaque and periodontal disease can lead to organ damage that can shorten your cat’s life. Cats frequently hide discomfort so well that you won’t notice problems until they become severe. That’s why it is important to have your cat’s teeth checked. Teach kittens that touching their mouths is a good thing, Flavor your fingers so the cat accepts you lifting her lips.

Accidents outside the litter box is the number one behavior problem in cats. However, it’s frequently not solely a behavior problem; it may be your cat’s way of waving a red flag that something is physically wrong. Don’t wait weeks, months, or even years.

Even if a medical problem is diagnosed and treated, the cat may continue to miss the box because a new habit has been established. That is why it is so important to get on the problem early. If your cat has an accident, use an enzymatic product to thoroughly clean the area. And don’t even think about punishing your cat, even if you catch her in the act. If anxiety is an issue (and it’s a big factor in litter box accidents), this will only make her more anxious.

As cats age, more frequent veterinary exams may be in the best interest of your cat. Also, as cats get older, many of their behaviors gradually change. You may notice that your cat doesn’t hear or see well and startles at your unexpected touch. Older cats may refuse food because they don’t smell or taste as well as they used to, or they may be in pain from dental disease. Senior cats move less, seek warmth and sleep more often; A recent study revealed that most senior and geriatric cats are actually suffering from some degree of arthritis. They don’t complain, so it’s up to you to be watchful. Cats that once bounded up and down the stairs but no longer do so typically aren’t just getting old; there’s an explanation, and arthritis is likely.

Geriatric cats sometimes develop cognitive disorders that prompt behaviors similar to those seen in human Alzheimer’s patients. Signs may include sometimes acting confused, forgetting bathroom etiquette, or loud vocalization (which also may be associated with hearing loss). It’s possible that trained cats who continue to think throughout their lifetimes and continue to learn may be less likely to develop cognitive problems.

Sick or Not Sick?

1. Changes in interaction: A previously clingy cat acting uncharacteristically aloof, or a more independent cat that suddenly transforms into “Velcro kitty” are examples.

2. Changes in activity: A decrease or increase in activity and/or a change in the cat’s daily routine can be a sign of a medical condition. For instance, arthritis is far more common than previously thought.

3. Changes in chewing or eating habits: Contrary to popular belief, most cats are not finicky eaters. Look for changes such as decrease or increase in how much the cat eats. Eating less can be a sign of several disorders, ranging from dental problems to cancer. Increased eating can be caused by diabetes, hyperthyroidism, or other health problems.

4. Changes in water intake: Drinking more or less water can be an indicator of a health problem, such as diabetes or kidney disease.

5. Unexpected weight loss or weight gain: Weight doesn’t always go up or down with a change in appetite. Cats with diabetes or hyperthyroidism, for example, may lose weight even if they eat more.

6. Bad breath: If those pearly whites don’t smell sweet as a daisy, there may be a dental and/or gum issue. Bad breath may also be related to a digestive disorder, infection, or kidney disease.

7. Changes in grooming habits: Fastidious groomers letting themselves go might be an indicator that the cat is ill. Over-grooming may be related to stress, pain, or skin conditions.

8. Change in sleeping habits: From catnapping more often to awaking in the middle of the night, the explanation may be illness, perhaps associated with aging.

9. Changes in vocalization: Wallflowers that begin to vocalize or cats that howl in the night may be doing so as a result of a medical problem. Feline cognitive dysfunction (feline Alzheimer’s), hyperthyroidism, high blood pressure, or anxiety are among the possible explanations.

10. Signs of stress: Cats dislike change more than anything. Changes in your family’s schedule, new pets coming or going, or even rearranging the furniture can cause stress. A cat that isn’t feeling well may be anxious as a result. Geriatric cats may be particularly prone to stress. Anxious cats may exhibit behavioral changes (such as missing the litter box) any physical changes. Anxiety requires the same professional attention as diabetes or a heart condition.

90% of cats over 12 have degenerative Joint Disease, symptoms as follows:

Unable to lie comfortably leads to not sleeping properly, leading to inappetance and resisting being handled. Owner deduces humane euthanasia is warranted. Give a 3-4 day trial of pain medication to see if they become more like they used to.